This project uses GIS to assess deforestation based on travel times in the Peru Amazonian forest area (see Map 1). More than 90% of deforestation occurs in the 0 to 50 hour travel time area. Furthermore, the deforested areas exhibit a clustering pattern in low travel time areas. The results of this project provide a clearer understanding of the relationship between geography and opportunity in Peru, which is critical given the country’s current efforts to create sustainable regulation and plan for forestry development.

In this study, we used GIS to evaluate deforestation patterns in Peru. Deforestation is of great interest and concern in the Amazonian region due to the slow forest succession rates of tropical forests as well as the importance of maintaining one of the most biologically diverse and rich areas in the world. Tropical forests play a significant role in ecological services. However, due to increasing demand for timber, space, and other resources in the Amazon, more and more trees have been cut down. In Peru, deforestation has increased from approximately 45,000 hectares cleared in 2004 to approximately 165,000 hectares cleared in 2012.  Illegal timber trafficking, which has also forced indigenous populations to migrate from their homelands, is one culprit, but slash-and-burn and other space-clearing activities, particularly for coca growing, have also driven Peru’s current deforestation. Forest concessions for Brazil nuts, which are inscribed in law, have also exacerbated the problem (Myers, N, 1994).

We believed that travel time estimations from city centers and settlements would be helpful in identifying which areas of forests are most likely to experience deforestation, given that cities serve both as sources for capital, including human capital, and as final markets. In particular, we surmised that areas temporally close and accessible to cities will experience significant attention, resulting in clustered deforestation. This is a problem because clustered deforestation, as opposed to well-distributed deforestation, presents increased risk of total loss for forests, which is particularly precarious in areas such as the Amazon, where biodiversity is invaluable and irreplaceable.

We first created a cost-distance grid based on roads, railways, rivers, land cover, and slopes. We then analyzed deforested areas in the year 2012, comparing these to the travel times that we calculated. From this study, we hoped to attain a better understanding of how policies need to be implemented spatially to encourage sustainable harvesting practices. 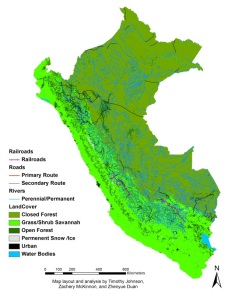 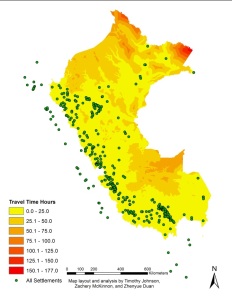 Table2: Relationship between deforested areas and travel time (all settlements)