While working on the script for our TV show, my friend Erica asked me who would give the next great speech at the Lincoln Memorial and what it would look like. We were desperate for distractions, so we decided to compile a list of people who had inspired us in the past, what issues they had discussed, and what was missing. In all, though some topics clearly hadn’t received the level of attention they deserved, we found that every issue definitely had its champion. The acknowledgment and will for change were fully accounted for. However, we did find one glaring issue with the list: what we had always seen as very interconnected topics were consistently treated and spoken about as stand-alone problems to be addressed with stand-alone solutions.

I am not the first person to acknowledge that there are policy silos; I think if you asked any principled bureaucrat, that would be near the top of their list of complaints. However, their complaints tend to be related to the ineffectualness of silos, and in reality, the effects of such artificial seperation can be much more insidious. In particular, by separating one issue from another, the solution to one problem can very easily become the source of another, a situation that gets especially sticky in the realm of progressive politics.

To give an example, progressive Democrats love Bernie Sanders because he focuses on two enormous issues–wealth inequality and global warming–with the diligence they deserve. Certainly, both are very admirable motivations, but are they symbiotic? In other words, can an egalitarian society also be environmentally friendly? The answer is probably yes–Scandinavia appears to be heading in that direction–but that will not happen without careful oversight.

The solution to inequality is having more wealth closer to the mean, which inevitably means a larger middle class. And what does a large middle class do? Spend, drive, eat meat, move to single-family homes, etc. That’s not a good recipe for the environment. Plotting the Gini coefficient against GHG emissions per capita paints a pretty damning picture (data from the World Bank):

The higher the Gini coefficient, the more unequal the society. Thus, per the trendline, the more unequal the society, the fewer GHG emissions per capita (Pearson’s r: -0.38, p-value: 0.0004 [1]). Heteroskedasticity notwithstanding, an antagonistic relationship is clear. More specifically, it seems that level of equality is an upper boundary condition of emissions output.[2] That is, countries with high inequality will almost certainly not pollute excessively, whereas countries with lower inequality can pollute a lot or a little depending on other factors, e.g., the overall wealth of the nation.

What I really want to make clear is that equality and sustainability are naturally at odds, and not acknowledging this is a serious problem. The most egregious culprit on this front is probably Elizabeth Warren. The sorts of arguments she puts forth inherently suppose that we can have it all: a booming middle class with all its wants met and an environmentally sustainable community. What isn’t addressed in her arguments is the massive elephant in the room: consumption. In fact, Senator Warren created an entire agency dedicated to protecting the rights of an individual to consume.

Moving beyond politicking, how do we actually create a society that is both egalitarian and environmentally friendly  (because both are elements of a sustainable society and absolutely necessary)? It begins with redefining the American Dream for the middle class in a radical way, where individuals make real changes to their lifestyles beyond buying the eco-friendly all-purpose cleaner or occasionally donating to charities. People need to live in cities, not suburbs. People need to use public transportation, not cars. People need to eat plants, not meat (particularly red meat). The solutions are there; we just need to be thinking about societal ills in the right way.

Until we treat issues as cross-cutting, we won’t be able to make efficient progress. All problems in life have multiple facets. For example, personal vehicles are not just bad for the environment; they also largely exclude poor populations. And in fact, personal vehicle ownership, whether it’s a hybrid or an SUV, encourages suburbanization, which brings about its own bevy of environmental and social costs. Thus, when looking at the effects of car use wholly, plug-in electric vehicles suddenly seem like marginal improvements. All of this is to say that we need to be diligent about holistic policy-making, because unaccommodating policies can be false idols at best and wolves in sheep’s clothing at worst.

[1] The graph and analysis exclude 6 countries as outliers (United States, Luxembourg, Russia, Estonia, Kazakhstan, South Africa), but the results do not change significantly with their inclusion. 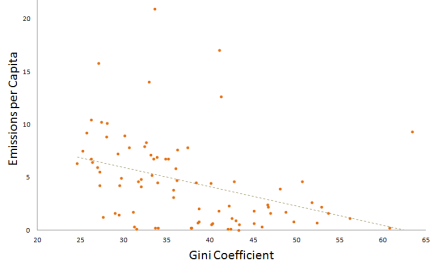 [2] The literature broadly categorizes the relationship between the Gini coefficient and emissions per capita as U shaped, which certainly fits our data, but thinking about the Gini coefficient as a downward-sloping ceiling is more useful in terms of opportunities for improvement in emissions for a given level of equality (and matches well with the non-constant variance).

[3] This graph suggests a normal distribution of incomes, which isn’t necessarily the case and indeed isn’t the case in countries such as the United States. However, for demonstration purposes, it is the most intelligible scenario and conveys a consistent intuition.

One thought on “Things I’ve Worked On: The Catch of Progressive Politicking”